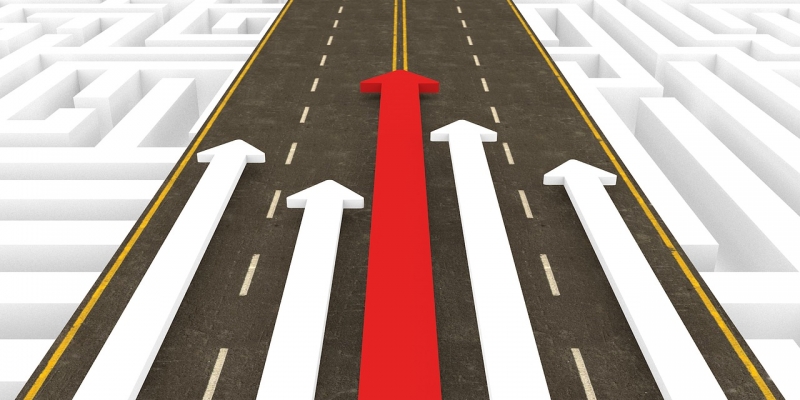 As an AmigaOS graphics driver developer I'm always interested in knowing what graphics hardware people are actually using. This year I've got the most accurate picture yet, with over 3x the submissions of last year's survey! Many thanks to the 348 people who took part.

Here's the data in visual form: 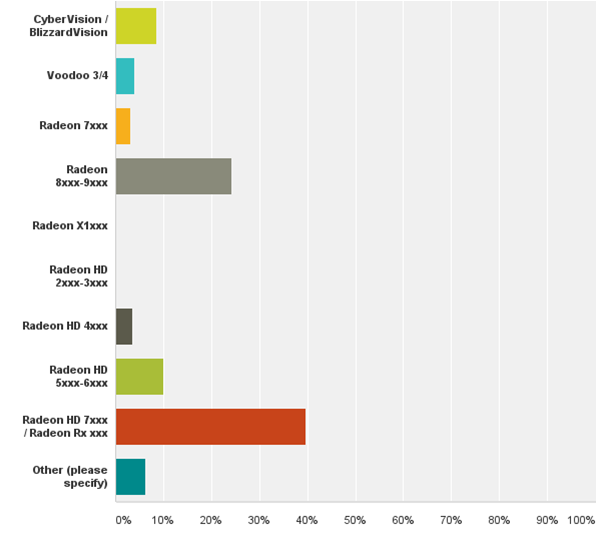 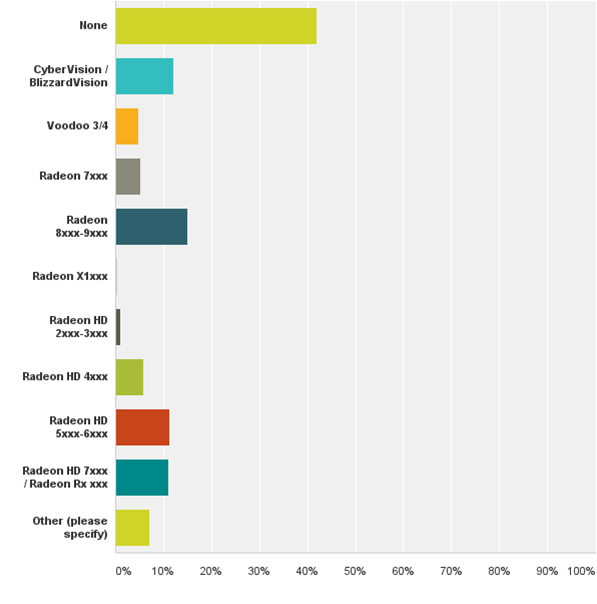 There were a number of people using Picasso IV cards, and several who listed UAEGFX/WinUAE as their card. So those are classic and emulation users.

What's a little confusing is a number of people claiming to use nVidia cards. Unless I missed a huge announcement, no nVidia driver exists for AmigaOS 4.x. I don't know if these people are joking, confused, or are listing the card in the PC that they run the WinUAE emulator on. Maybe next year I'll add a WinUAE/UAE category to avoid this confusion.

One person also listed having an Amiga Vampire card as extra graphics card. Interesting, although I'm not sure how that would be used with AmigaOS 4.x. Last I checked, the Vampire board is a 68K accelerator, and AmigaOS 4.x requires a PowerPC CPU.

I'm happy to see a good number of people using the latest Southern Islands graphics cards (just under 40%). This card series is Warp3D Nova capable. I've put a lot of work into delivering modern shader based graphics via Warp3D Nova, and want to see it being used as much as possible. The more people have these cards, the greater the motivation is for developers to take advantage of Warp3D Nova.

Seeing people use older hardware is nice, especially those keeping their PowerPC accelerated classic Amigas running. That said, I hope we can convince them to upgrade to a new PCI-Express motherboard. We're working hard to push AmigaOS forward, and it would be great to have you all along for the ride. Maybe A-EON's low-cost Tabor (A1222) board will help, or maybe we need more software that takes advantage of newer hardware. I'd be interested to hear your thoughts (post them below in the comments section).

Thanks once again to everyone who took part in the survey.