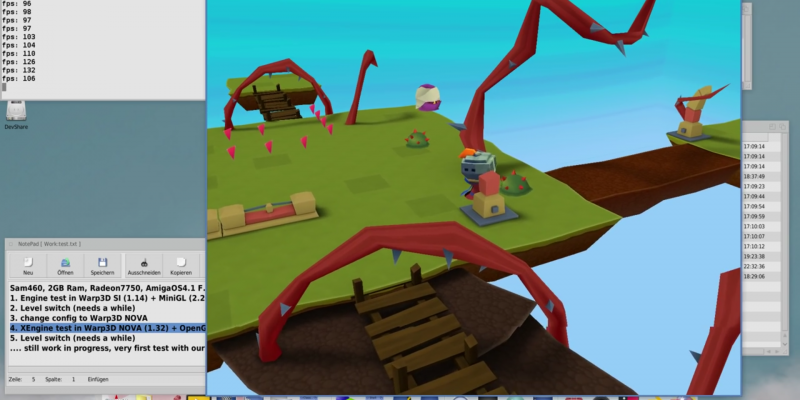 Curious how OpenGL ES 2 (GLES2) + Warp3D Nova's performance compares to MiniGL + Warp3D? Well, the first comparison is here courtesy of the Entwickler-X team. They've just released (as at 1 Nov. 2016) a video showing an upcoming game running on both MiniGL and GLES2. The game is built using X-Engine, a game engine that they've been working on.

While it isn't an exact comparision, eyeballing the frame-rates gives an approx. 4x speed boost in two of the three levels, and >2x boost in the third. Here's the video:

You've got to be careful when using benchmarks for comparison. While the results above are from a "real-world" test and are therefore "good" in some people's eyes, remember that they only show the performance of the X-Engine when rendering these particular levels under the test's conditions (resolution, hardware, etc.). Expecting other software to get the same performance boost would be foolish. Indeed, level 2 in the video had a speed boost of just over 2x using the same engine. What's going on there?

The performance limiting bottlenecks for Warp3D and Warp3D-Nova are different. Vertices/s are often the bottleneck with Warp3D, whereas with Warp3D Nova it's typically the draw-calls/s that limit performance. MiniGL and GLES2 have the same bottlenecks as the Warp3D variant they sit on top. Level 2 appears to be much simpler than the other two, so it's highly likely that the almost 2x frame-rate jump in MiniGL is due to having significantly fewer vertices. Meanwhile, the GLES2 frame-rate stays fairly constant for all levels, and actually rises a bit as more objects are collected and more badies are killed (resulting in fewer objects to render). That's consistent with draw-calls/s being the limiting factor.

Thanks to the different bottlenecks, doubling the number of vertices per model would probably kill the frame-rate in MiniGL while leaving the frame-rate in Warp3D Nova relatively unchanged. Warp3D Nova can render hundreds of millions of vertices/s with large complex models (I got 440 million triangles/s in one test); far above what Warp3D is capable of. So please bear that in mind, and do not go round claiming a general 4x boost, or saying that "Warp3D Nova can do X vertices/s." It's a lot more complex than that.

Despite the warning above, the results do show that GLES2/Warp3D-Nova offer a good performance boost in a real-world scenario. This is consistent with other tests which also show a sizeable performance boost over MiniGL/Warp3D. This is entirely expected given that Warp3D's design is rather ancient, and Warp3D Nova is based on modern GPUs. Plus, Warp3D Nova delivers shaders, opening up a whole new world of possibilities.